Encountering Rock on a Construction Project 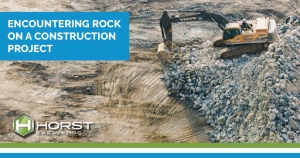 Discovering you have a rocky site is not something any land developer looks forward to. If your team doesn’t get a clear picture of how much rock exists before construction kicks off, removal services could potentially add time to your construction schedule. And furthermore, the costs of rock removal may come as an unpleasant surprise, depending on how your excavating contract is written.

While mother nature can always surprise us with unforeseen underground conditions, an experienced, well-qualified excavator will be prepared and ready to take control of this potentially frustrating situation. Your site contractor should be able to walk you through the steps of the process and give you an idea of the impact to your project so progress can continue smoothly.

Horst Excavating has been removing the rock from construction sites for decades. Over the years, we’ve developed tried and true ways to predict and remove rock embedded on the site. In this blog, we’ll share all you’ll need to know when it comes to rock on construction projects.

How to Tell If There’s Rock Before Construction Starts

Before your construction project begins, you can check for rock on your site to get a feel for what lies ahead for you and your contractors. There are a few ways you can do this, but one of the best is to have a geotechnical engineer conduct a boring log for your site.

During this process, they will drill several holes into the ground at various locations on the site. These holes will show what lies beneath the surface — whether it’s topsoil, dirt, rock, water, or something else. It will also tell how deep each layer goes.

The more bores that are drilled, the more expensive the report, but the more accurate the report will be. If you only have a handful of these done on a site that’s several dozen acres, you may not be getting a complete picture. Your geotechnical engineer will be able to help you develop a plan that best analyzes your site to give you accurate information.

A good way to economize is to concentrate the location of the bore holes in areas that will require excavation and trenching. But keep in mind this could be more than just your building’s footprint. From installation of utility lines, to grading, to other aspects of sitework, more goes below grade than just the building’s foundation.

At Horst Excavating, we’ll input the information from the boring log into software that extrapolates the data and give us a clear understanding of the full picture of what’s going on below grade.

If boring logs are not something that’s in the cards for your project, there are other ways to get an idea of what may lie below the surface.

One way is to make decisions based upon past experience. Local excavators that have done work in the same area should be familiar with how rocky the ground is. If they worked on an extremely rocky site just half a mile down the road, it’s likely that your site will also have a substantial amount of rock.

Excavators will also take a look at the site and the surrounding areas both in person and with online aerial maps. While not always all-encompassing, these methods can give small indications as to whether or not there is a lot of rock in the area.

Who Is Responsible for the Rock Removal Cost?

From blasting to scraping to hauling it away, removing rock takes time, skill, and the right equipment.

Then, there’s the element of surprise. Depending whether or not there was a geotechnical report — and how extensive that report was — you and your contractors may have no idea how much rock will need to be removed until digging starts. Running into a significant amount can add a lot of man hours to the project and can push out the schedule.

During the bid stage and before the contract is signed, the owner will have to decide whether they’d like to leave the rock removal cost to the excavator or pay them at a unit price per cubic yard of rock removed.

In the first option, the excavator will include an item in the project’s budget to cover their expenses for removing rock. Without a detailed geotechnical report, this number is really an estimate. If there is much more rock on site than they expected, they’ll have to incur the loss. If there is less rock than what’s expected, the owner may have paid slightly more money than they had to.

But keep in mind, it’s not in excavator’s best interest to inflate the price of this in order to cover unnecessary risk or make out with more money. While it shouldn’t be the only factor of selecting a contractor, price is a major factor. If a contractor includes a higher rock removal budget than their competition, they’re risking not getting the project at all.

With the second option, the owner agrees to pay a standard rate for the rock’s removal. The more rock that’s removed, the more they’ll pay the contractor.  The less rock they remove, the less they’ll pay.

The option that works best is subject to each owner. Either way, it’s sort of a gamble. However, the more extensive the geotechnical report is, the more accurate the pricing for the rock removal will be, regardless of whether the contractor charges on flat fee, or a fee per cubic yard removed.

How The Rock is Removed

Your excavator runs into rock on your site, and it needs to be removed before the project progresses. How exactly will this be done?

The first step would be to blast it. The preferable way to do this is to excavate far enough down so there is a generous layer of dirt above the rock. This layer of dirt will act as a blanket, keeping the blasted rock from becoming airborne and potentially causing damage.

From here, the rock will be removed from the ground. Most of this rock can be broken down and sized properly for use as onsite fill material by using an excavator with a hoe ram attachment and a crusher.

If the rocks aren’t very deep, blasting may not be required. They can instead be removed with a dozer and a ripper.

If you’re worried about running into rock during your construction project, start by getting a clear picture of what lies below. While using contextual clues and aerial photography can be less expensive, conducting a detailed geotechnical report will often be more accurate.

Once you’ve obtained this information, you and your excavator will develop a safe and efficient plan to remove the rock with a realistic schedule and budget. Removing rock from your construction site starts with getting a clear picture of what lies below with a detailed geotechnical report. This will give you and your excavator enough information to come up with a solid plan and realistic schedule.

From here, your excavator will execute the most efficient and safest way to remove the rock needed to make way for your project.

A rocky site can pose some challenges, but as long as you are working with an experienced excavator committed to doing things the right way, your project will progress smoothly.